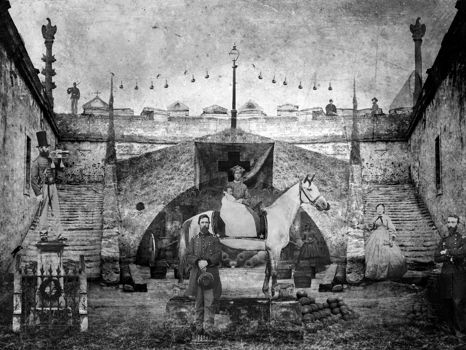 "These photomontages depict an arcane netherworld set somewhere in the mid-19th century American South. Created in the realm of historical fiction, they weave together the disparate, war-ravaged lives of soldiers, civilians, slaves, women, children, and animals with the iconography of the South. These characters, suspended in their bizarre afterlives, remain disconnected from the particulars of history. In creating these montages I combine selected elements from historical images with my own photography. Each piece contains approximately one hundred layers which are digitally sized, blended and collaged into a single, large scale image.

The inhabitants of this mysterious world, in ritual and in ruin, gather to celebrate, glorify, perform, exalt and mourn while holding onto hope for their own resurrection. Created from three centuries of photography, this work explores a region that remains, in part, unwontedly bound to yesterday - a place whose present is as peculiar and as haunted as its past."

ABOUT DAVID KNOX: David Knox is a photographer/artist who has been traveling the backroads of the American South documenting the region’s architectural ruins, landscapes, and people for over 25 years. He has a strong interest in the history of photography and worked in the darkroom for decades specializing in antiquated photo processes before switching to digital work in 2010. His current work combines 19th, 20th and 21st century processes and ranges from small prints on paper to large scale, multi layered collages on aluminum.

David Knox began working as a photography instructor in 1996 and has taught continuing education classes and workshops since at The Showcase School in Atlanta, The University of Texas in Austin and at The Oklahoma Contemporary. He completed his MFA at the San Francisco Art Institute in 2005. His work has been shown in galleries in Atlanta, New Orleans and throughout the American South.