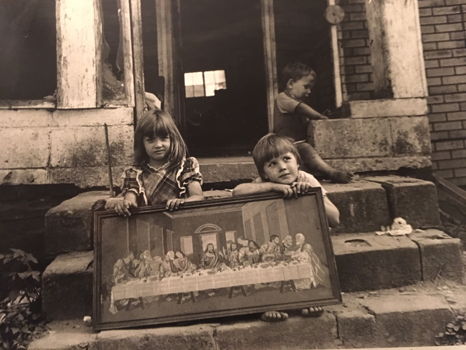 "Cabbagetown, a former mill village in the heart of Atlanta, was Catledge's studio for more than 20 years. Established in 1881 by the Fulton Bag and Cotton Mill Company, the neighborhood housed workers and their families, emigrants from the North Georgia Appalachians. After the mill’s closing in the late seventies, many of the residents of this insular community remained. Cabbagetown during this period was rich with personality and character, and a frontier of experience for Catledge. Beginning in the early 1980s he would make weekly trips with an unstructured and intuitive itinerary to capture what he saw in black and white. They accepted him and his camera into the community. The resulting candid and forthright body of work gives visual testimony to the remaining families of the mill, around whom the city was rapidly encroaching."

ABOUT ORAIEN CATLEDGE: Oraien Catledge (1928-2015) learned life’s lessons growing up in Tutwiler, Mississippi, frequenting his father’s barbershop-pool hall-domino parlor. After a long career with the Mississippi Department of Public Welfare, he relocated to Atlanta Georgia to work for the American Foundation for the Blind. At the age of 51, he learned to use a Leica, and began what he describes, as an “irresistible” pursuit. Although he lacked formal training with a camera and was hindered by a severe progressive visual impairment, photography became his private passion. Catledge’s background working with impoverished people and his own fading eyesight, are elements underscored in these portraits and landscapes.

In 2011, he was honored with the Mississippi Institute of Arts and Letters Award for his photography. Photographer Mary Ellen Mark noted at that time, “Oraien Catledge surely loves what he does and loves the people he photographs. He sees all humanity in his own clear, honest and beautiful way”."