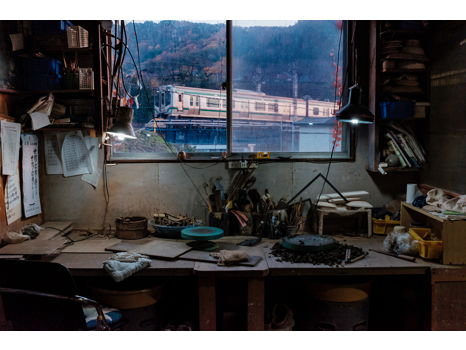 Bidding on this item has closed!
***This is the last at this price level for this image. Retail value is now $1200.

"This image was made at the studio of a potter in Yamadera, Japan, at the foot of a mountain where there is an 1100 year old monastery. There is but one train an hour, and in the late Fall evening, the train rumbled across the bridge, lit up by the reflected last light on the river below. The potter has since renovated his studio, making this photograph impossible to replicate.

In addition to the accolades for this series, this particular museum edition piece was displayed at the 50th anniversary exhibition of the prestigious Center for Photographic Art in Carmel, CA in 2017. The image has also garnered a 2nd prize out of 1150 entries in Sohn Fine Art Gallery's 2017 group exhibition juried by the directors of the Norman Rockwell Museum. This is the first 'museum edition' piece created of this image (currently one more exists); it would normally not be for sale and is a rare item.

ABOUT GEORGE NOBECHI: George Nobechi is an award-winning fine art and documentary photographer based in Tokyo, Japan, and is also the founder and director of Nobechi Creative. Born in Tokyo, Japan 1980, Nobechi is bicultural: Japanese and Canadian. Nobechi graduated from the University of British Columbia with a BA in History and International Relations in 2002. A fourteen-country, six-continent, round-the-world solo journey in 2008 spurred his passion in photography. In 2015 Nobechi studied under renowned National Geographic photographer Sam Abell and decided to pursue photography full-time as a career.

His series of quiet photographs shot through windows during three years on the road (2015-2017), Unmoored (Here.Still.) has won him international acclaim and was awarded the best landscape series in PDN Magazine's "The Curator" awards, Silver Prize in the Best Fine Art Series category in 2017 PX3 Paris Photo, a 3rd Prize in the Fine Art Landscape Category in the International Photography Awards 2018 and a coveted Top 50 Award in Critical Mass in 2017, among other awards. Nobechi’s work has been exhibited in Japan, Italy, Australia and throughout the USA, and has been published by PDN Magazine, Fraction Magazine, The Boston Globe, Feature Shoot, and Instagram’s curated official blog. In 2018 Nobechi had his first major solo exhibition of photographs at the Jackson Dinsdale Art Center at Hastings College in Nebraska, and a second solo exhibition in November and December of this year at the Workspace Gallery in Lincoln, Nebraska.