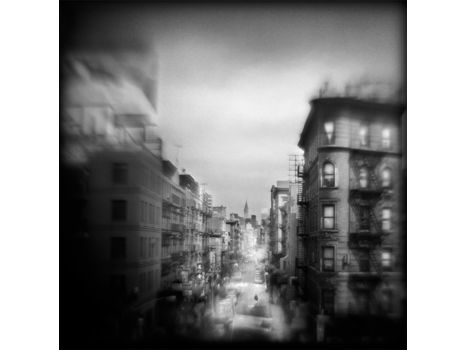 "From the series and book, Absence Of Being (Book published by Damiani, 2016)."

Susan Burnstine is one of the few photographers today avidly pursuing alternative processes to create an idiosyncratic and deeply personal visual landscape. Initially, Burnstine sought to find a way to portray her dream-like visions entirely in-camera, rather than with post-processing digital manipulations. To achieve this, she has created twenty-one handmade film cameras and lenses that are frequently unpredictable and technically challenging. The cameras are primarily made out of plastic, vintage camera parts, and random household objects, with single-element lenses molded from plastic and rubber. Learning to overcome their extensive optical limitations required Burnstine to rely on instinct and intuition--the same tools that are key when attempting to interpret dreams.

ABOUT SUSAN BURNSTINE: Susan Burnstine is an award winning fine art photographer originally from Chicago, now based in Los Angeles. Represented by galleries around the World and widely published across the globe, she also conducts workshops internationally and has written for numerous photography publications, including a monthly column for Black and White Photography Magazine (UK).

Burnstine has had over 25 solo exhibits internationally. Her work is held in numerous museum and private collections and she’s had two award winning monographs published, Within Shadows (Charta, 2011) and Absence Of Being (Damiani, 2016).