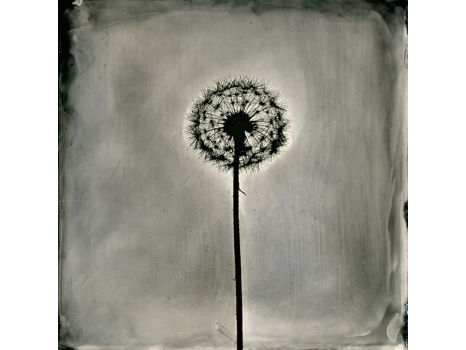 Sales of this item have closed!
The limited edition of 100 (plus five artist proofs) is an archival pigment print, featuring a 7×7” image on 12×10” hot press, cotton rag paper. Each print is signed and numbered by the artist. Blow is sold out in its original tintype series and is being reprinted in this exclusive edition for PhotoNOLA.

S. Gayle Stevens is a wet plate collodion artist inspired by natural history, science and alchemy. Blow is from her series of wet plate tintypes, Calligraphy, featuring plant and animal specimens collected by the artist on her walks. Stevens explains, “The silhouettes of the photogenic drawings are rendered as black shadows and echo the brushstrokes in Chinese calligraphy, sparse yet expressive. …These images are my memento mori; an acknowledgement of lives passed, a rendering of fleeting shadows.”

“Happy accidents on the plates, the mystery sense of chance; I like the flaws. Sometimes I think the flaws make the plate. It is like the spirits are coming out and speaking through you.”
– S. Gayle Stevens, 2010

ABOUT THE ARTIST
S. Gayle Stevens has worked in antiquarian photographic processes for over fifteen years. Her chosen medium is wet plate collodion for its fluidity and individuality. She exhibits extensively across the United States and internationally. Stevens received an MFA from the School of the Art Institute of Chicago in 1999. She is an educator, speaker, juror, curator and active member of the photographic community. Named one of the Critical Mass Top Fifty Photographers for 2010 and 2014, Stevens received second place in the Lens Culture International Exposure Awards in 2011 and was a finalist for the Clarence John Laughlin Award in 2012 and 2014.

Stevens’ work has been featured in Fraction, Square, Shots, Diffusion, B + W, South by Southeast, and Fusion magazines. She has been published in Inventing Reality: New Orleans Visionary Photography (Luna Press, 2013), Calligraphy, a collection of her work by North Light Press (2013), and in the third edition of The Book of Alternative Photographic Processes (2015). Stevens’ work is in the permanent collections of the Ogden Museum of Southern Art, the Rockford Museum of Art, the Center for Fine Art Photography, the University of New Mexico Art Museum, and the New Orleans Museum of Art. She divides her time shooting between Pass Christian, Mississippi and Downers Grove, Illinois, where she resides. Stevens is represented by: Tilt Gallery in Scottsdale, Catherine Couturier Gallery in Houston, Gallery Kayafas in Boston, and Paul Cava Fine Art Photographs in Philadelphia.

* Please note that shipping on international orders will be calculated on an individual basis.


Price includes shipping within the US
Sponsored By