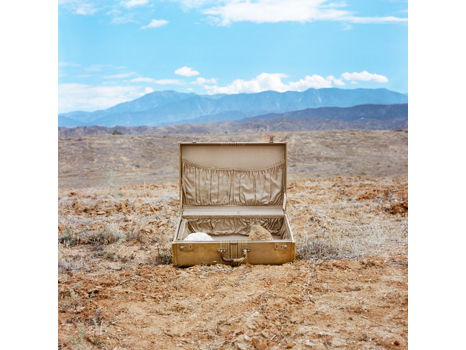 Sales of this item have closed!
The edition is a museum quality archival pigment print featuring an 8×8” image size on 12×10” hot press, cotton rag paper. This special edition is limited to 100 prints (plus five artists proofs), and proceeds directly support PhotoNOLA festival programming. Each print is signed and numbered by the artist.

Desert Suitcase, from Aline Smithson's recent series Due West, is a nod to those who move west in search of the promised land. Smithson is an award-winning California-based photographer whose work is published and exhibited internationally.“The odd juxtapositions that we find in life are worth exploring, whether it is with humor, compassion, or by simply taking the time to see them. I tend to isolate subject matter and look for complexity in simple images, providing an opportunity for telling a story in which all is not what it appears to be.” – Aline Smithson

ABOUT THE ARTIST
After a career as a New York Fashion Editor, Aline Smithson discovered the family Rolleiflex and never looked back. An artist now represented by galleries in the U.S. and Europe and published throughout the world, Aline continues to create her award-winning photography with humor, compassion, and a 50-year-old camera.Aline has exhibited widely including solo shows at the Griffin Museum of Photography, the Center of Fine Art Photography, the Fort Collins Museum of Contemporary Art, the Lishui Festival in China, the Tagomago Gallery in Barcelona and Paris. In addition, her work is held in a number of museum collections. Her photographs have been featured in publications including PDN, the PDN Photo Annual, Communication Arts Photo Annual, Eyemazing, Soura, Visura, Fraction, Artworks, Lenswork Extended, Shots, Pozytyw, Incandescant, Square and Silvershotz magazines.

Aline founded and writes the blogzine, Lenscratch, which celebrates a different contemporary photographer each day. She has been the Gallery Editor for Light Leaks Magazine, is a contributing writer for Diffusion, Don’t Take Pictures, Lucida, and F Stop Magazines, has written book reviews for photoeye, and has contributed forewords for artist’s books by Tom Chambers, Robert Rutoed, and Nancy Baron, among others. Aline has curated and juried exhibitions for numerous organizations, and is a reviewer at many photo festivals across the United States. Aline is also a founding member of the Six Shooters collective.

Aline’s honors include the Rising Star Award through the Griffin Museum of Photography for her contributions to the photographic community (2012) and the 2014 Excellence in Teaching Award from CENTER. In 2014, Aline’s photographs were selected for the Critical Mass Top 50, the PDN Photo Annual, and Review Santa Fe. The Magenta Foundation has just released a retrospective monograph of her photographs, Self & Others: Portraits as Autobiography (Fall 2015). She lives in Los Angeles and is currently teaching and curating for the Los Angeles Center of Photography.