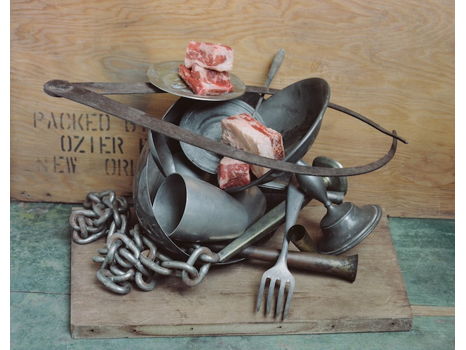 Sales of this item have closed!
David Halliday is renowned for depicting elegance in simplicity, beauty in the mundane, and the brilliant vitality of the people, places, and objects that he encounters on a daily basis. This previously unreleased image was created exclusively for supporters of PhotoNOLA. The edition of 100 (plus five artists proofs) is an archival pigment print, featuring a 7×9” image size on 10×12” hot press, 100% cotton rag paper. Each print is signed and numbered by the artist.

ABOUT THE ARTIST
David Halliday produces lush and elegant images that are both classical and modern. Using natural light to illuminate his subjects, Halliday’s direct formal approach offers a fresh take on the historic art prototypes of still life, landscape and portraiture. Halliday’s work is characterized by attention to detail and composition, emphasizing volumes, balances, texture and areas of subtle shading. His photographs convey an intimate beauty, combining meticulous craftsmanship with touches of eccentricity and surrealism. A purist behind the lens and a master printer, Halliday creates images that transcend time.

Halliday was born in Glen Cove, New York and studied at both Syracuse University and The Maine Photographic Workshops. During a brief break from photography, he took a job as a chef, working at numerous restaurants throughout the Northeast and Midwest until finally his cooking led him to New Orleans. It was there in the early Nineties that he began to pursue photography fulltime. His travels have taken him to Russia, Indonesia, Tonga, as well as Italy and Greece. Whether working inside or outside of the studio Halliday makes great use of his surroundings when creating images.

In 2003 Halliday published a hand-bound limited edition book with 21st Editions entitled, “The Perfect World of David Halliday.” He has been featured in numerous solo exhibitions including Culinary Delights: Photographs by David Halliday at the San Antonio Museum of Art in 2009 and The Past Still Present at the Ogden Museum of Southern Art in 2012. His work is featured in many collections including Banana Republic, Hunter Museum, The New Orleans Museum of Art, The New Britain Museum, and The Museum of Fine Arts, Houston. David Halliday is represented by: Arthur Roger Gallery, Carrie Haddad Gallery, Graficas Gallery, Julie Heller Gallery, McMurtrey Gallery.

Price includes shipping within the US
Sponsored By