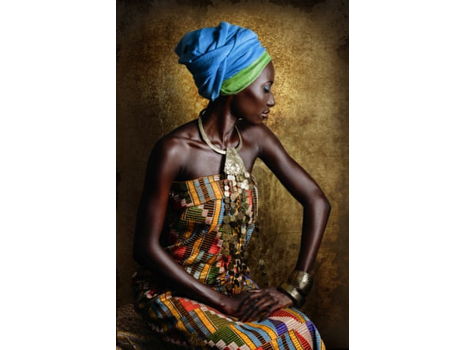 "This image is part of Choumali's 2014 portrait series, "Resilients", which documents young, professional African women who struggled with connecting to their family's traditional past. The only requirement was that the women had to wear traditional clothing already worn by their grandmother or an older female relative, emphasizing the link between past and present."

ABOUT JOANA CHOUMALI: Joana Choumali (born 1974) is a freelance photographer based in Abidjan, Côte d'Ivoire. She uses photography to explore issues of identity and the diversity of African cultures. As a child, Choumali would travel to Abengourou, a small town in southeast of Côte d’Ivoire. She often felt a cultural disconnect as they did not speak the same language or share life experiences. After her grandmother died in 2001, Choumali lamented losing part of her family history and questioned her identity as an African. This experience inspired her 2014 portrait series, "Resilients." Her work has been exhibited in Paris, London, Amsterdam, Italy and Africa. In 2014, she received the Lens Culture "Emerging Talents Award".

The photograph comes with a letter of authenticity from the artist.

Donated By: Joana Choumali and The African Artists' Foundation