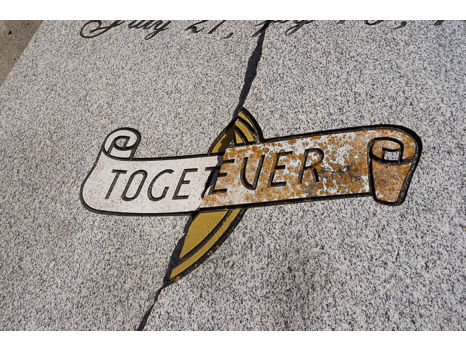 "The cities of the dead in and around New Orleans are at a unique point in history. Environmentally, it is getting harder to preserve them. As we lose whole cities on the coast, the cemeteries are not moving with the people and are now under cover of water. A bit further in, they occasionally get washed out during a storm and the communities spend years matching caskets, tombs and remains. The cemeteries in the city are popular tourist attractions which puts wear and tear on the places of mourning.

Communally, public grieving has also changed. In the Victorian Era, mourning was very public and had a formalized code and timeline. Over the years, death customs have moved from the home and being part of life to away from home and into the hands of strangers. There are less memorial days and visiting cemeteries.

Growing up, visiting cemeteries was a family activity even if we didn’t know someone there. My Grandma and I would walk to the small cemetery down the road from their farm and do grave rubbings to try to read the weathered words. Near my home, we would have expeditions down a long dirt road collecting errant golf balls from a nearby course and finish at the cemetery to see what people had left for the deceased guitarist for Deep Purple and to walk the stations of the cross.

I visit cemeteries often and have a particular fondness for pet cemeteries. I enjoy finding people’s small touches as they remember their loved ones and appreciate the many lives the place represents."

ABOUT TAMMY MERCURE: Tammy Mercure (1976) was named one of the “100 under 100: The New Superstars of Southern Art” by Oxford American magazine. She is one of the fifty photographers represented in the upcoming traveling exhibition “Southbound: Photographs of and About the New South” originating at the Halsey Institute of Contemporary Art in Charleston, SC. Her work has been exhibited at the Ogden Museum of Southern Art, Atlanta Contemporary Art Center, the William King Museum in Abingdon VA, and Tracy Morgan Gallery in Asheville. She has been featured on CNN Photos, VICE, Daily Mail, GQ, NPR Big Picture Show, and more. She was published in the Southern Cultures, Guardian UK (Big Picture),Oxford American and in the book “Place, Art, and Self” by Yi-Fu Tuan. She has a BA from Columbia College Chicago and an MFA from East Tennessee State University. She lives in Violet, LA (outside of New Orleans) and is a member of Antenna, an artist run collective.

Her work concerns the rites and rituals of the American South and the relationship one has to the land. She often works in book form starting with a popular monthly zine series using letterpress in 2012. She has continued to make books and designed Polo Silk’s “Pop That Thang” in 2017. She has spoken on the subject in many panel discussions, taught a one-day book workshop for PhotoNOLA, and curated three unique book exhibitions at Antenna called "The Blue Library."